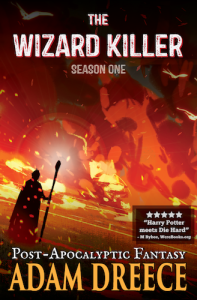 The Wizard Killer is a popcorn adventure with gunslinging, glitchy magical tech and a hard-suffering hero in a world gone to hell.

The protagonist definitely has the sardonic edge of John McClane from Die Hard (as another reviewer pointed out) The setting is a bit closer to Mad Max and its scattered communities of survivors scrounging off each other and the old world’s leftovers. Normally I find combining magic and tech a questionable choice, but it works here because this magic is a difficult and often costly resource.

Although the book (Season One) is short and the chapters fly by, I suggest reading it in instalments, since the tone is a little uneven sometimes between chapters. It’s important to keep in mind, however, that each chapter is its own episode. In any kind of serial a tonal shift between episodes is expected. Kudos to Dreece for keeping this up week after week. I look forward to finding out what happens Season Two.

This entry was posted in Book Reviews, Miscellany.

One thought on “Review: The Wizard Killer”

Thanks for the review, Erin. I’ll definitely be paying more attention to the episodic transitions and tonal impact in season two.