In 2009, Guy Ritchie gave the public a new cinematic take on Sherlock Holmes. It was fast-paced, had a gothic aesthetic, and fun one-liners between buddies Homes and Watson. It was widely successful.

In 2010, the BBC first aired the series Sherlock by Steven Moffat and Mark Gatiss. They mined from aspects of the stories that aren’t usually adapted, and used a modern setting to point out the differences and similarities between Sir Arthur Conan Doyle’s time and our own. It continues to be widely successful.

Paul McGuignan’s Victor Frankenstein movie comes out this November, and if the trailer is any indication, it’s supposed to be fast-paced with a gothic aesthetic and fun one-liners between buddies Frankenstein and Igor. If it’s good, and there are no reviews as of yet, then I hope it’ll be widely successful. Interesting bit of trivia: McGuignan directed four episodes of Sherlock.

Check out the poster similarities below. 20th Century Fox’s (the studio behind Victor Frankenstein) marketing campaign is definitely targeting the same people who loved Sherlock Homes and the Sherlock series. 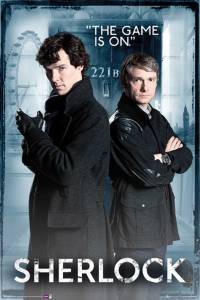 Here’s why this connection matters to me:

Two years ago, I wrote a pilot for a series called Raising Frankenstein. I mined from aspects of the novel that aren’t usually adapted, and used a modern setting to point out the differences and similarities between Mary Shelley’s time and our own.

I don’t have an agent, and must therefore rely on contests and pitch festivals. Raising Frankenstein made it through to the Quarter Finals of the 2014 ScreenCraft Pilot Launch competition. I also took it to The Great American Pitchfest in Los Angeles last year, and got some promising nibbles. I followed through on those nibbles, but in the end I didn’t manage to reel in the metaphorical fish. I sent query letters to execs from two Canadian production companies that are currently making some of the most kickass science fiction television I’ve seen. I even wrote a letter to a television actor whose long-running previous series had recently ended, and who would be perfect for the role of the Creature. Actors with enough cred sometimes executive produce their projects.

While I still love screenwriting, and would love to work as a television staff writer even if I never sell a pilot, I’ve decided to focus on my novels and short stories for now. When it comes to screenplays, scenes including (for random example) dragon lairs or haunted space ships require a bigger production budget. In a novel, scenes including the exact same things cost just as much as a scene at a P.T.A. meeting. I’m also not in a position to both rent a place in L.A. and be an unpaid intern for months or years until I earn the trust of people who might want to read my scripts. I’m still chasing my writing dreams, but on a different road with a different vehicle. Novels rock. I love reading them. I’m loving the hell out of writing them.

There is no better time for my modern-day Frankenstein television show to exist, but realistically, the time between writing any script and the actual production is often years, sometimes decades. I wasn’t chasing trends when I wrote the pilot, and it’s probably not healthy to chase trends now. Hopefully someday soon I’ll earn representation for my current work, and maybe that’ll open some doors for the things I already have in my portfolio. If that time comes, I can bring Raising Frankenstein back to life.

This entry was posted in Miscellany.