While most film historians say that the period of classic movies about Dr. Frankentein’s infamous creature ended with the release of “Bud Abbot Lou Costello Meet Frankenstein” in 1948, but Eldin Spooner’s hidden gem “Frankenstein And The Loch Ness Monster” had its limited release the next year, and stands firmly on its bare, undead feet.

Following his creator and nemesis on his way to the arctic, Frankenstein’s Creature (Holloway) arrives in the Scottish town of Drumnadrochit, by Loch Ness, and he’s starving. Kicked out of a local pub, the Creature tries his giant, sewn-together hand at fishing, only to come face to face with Nessie, voiced with by the dryly funny Cicely Poole. When he finds out that she is the last of her kind, just as he is the first of his, and lonely, the Creature defends the Loch Ness Monster from a boat full of harpoon-wielding tourists, led by Oliver Mobley as Captain Artair Macleod. They turn their harpoons (and apparently pitchforks and torches) to attack the Creature, but Nessie comes to the rescue and sinks their boat before they can destroy her new friend.

This oddly sentimental adaptation of Mary Shelley’s classic science fiction and horror character takes its cue from part of the story near the end of the novel, but takes it in a direction that emphasizes the “Friend good!” catchphrase made famous in James Whale’s second Frankenstein movie. One particular highlight of the whole film is the scene where Nessie teaches the Creature highland dancing, a marvelous piece of choreography, especially since Nessie has no feet.

The Scottish stereotypes are cringe-worthy, and Nessie is quite obviously a rubber puppet with a stiff neck, worked by a beginner puppeteer, but overall “Frankenstein And The Loch Ness Monster” holds up as a unique contribution to the tradition of Frankenstein films.

Rating: 3 lightning bolts out of 5

* This film does not actually exist, but it should. 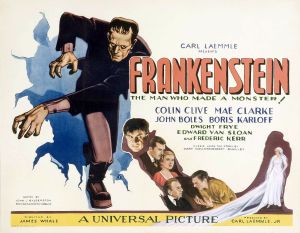